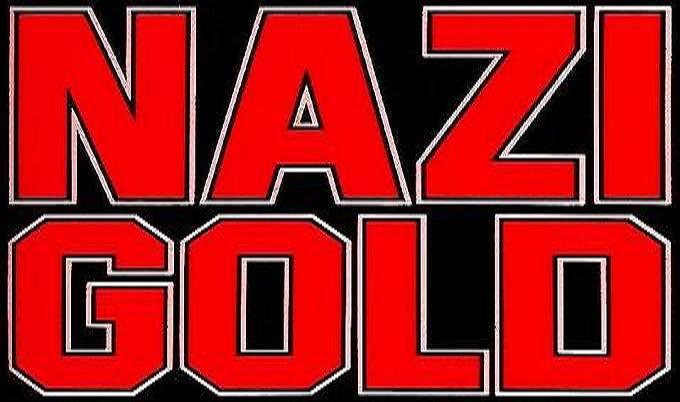 A World-wide Scandal or Easy Booty for Political Scumbags

The latest episode in the Nazi gold saga is a New York Times report that in the 1950s the Federal Reserve Bank of New York melted down some bricks etched with swastikas and reissued them stamped with Eisenhower's picture or something (a US seal).

Image that. Melting down gold and putting a different stamp on it. We're sick of this Nazi gold crap. Gold is meant to be melted down and to lose its history. That old codger Charles de Gaulle said it best when he noted that gold is "made indifferently into bars, ingots and coins, which does not have any nationality . . ."

This editorial is about Nazi hucksterism. It's about a scam, a con, a political ploy, a moneymaking opportunity.

You had to know you were being conned when the first reports of Nazi gold were issued by the British Foreign Office. The British Foreign Office doesn't give a flying frisbee about how many Jews the Nazis killed. The British Foreign Office is that duplicitous propaganda outlet that never concerned itself with Nazis down in Buenos Aires until the day British warships were on their way to the Malvinas Islands to secure British control of oil deposits in the surrounding waters. Then, suddenly, the Dan Rathers of American television were telling us, "Hey, some of Hitler's followers went to Argentina after World War II!" Talk about warmed-over history.

The Foreign Office with their latest Nazi story, a tale of Nazi gold, were simply targeting Swiss banks already wounded by deposit outflow.

The Foreign Office was trying to cash in on flight capital fleeing elsewhere. The potential beneficiaries of the FO blast of Nazi flak were British banks like Barclays, NatWest, Lloyds, and Hong Kong Shanghai.

Next on board the Nazi gold train were political scumbags like Alfonse D'Amato. He pulled out his copy of 101 Uses for a Dead Nazi, turned to the page on how to get votes, and read: "Position yourself at Sixth Avenue and Central Park South, serve up hors d'oeuvres of grape leaves and stuffed Hitler, and bash foreigners who talk funny." Whooo! D'Amato is going after the evil gnomes of Zürich!

Good thing Attila the Hun wasn't in the news. No telling how far back in time D'Amato would had to reach to practice irrelevant politics. More hucksterism. If D'Amato had wanted to right any wrongs, he would have inquired into the historically documented Hitler-financing activities of good Wall Street gnomes like Brown Brothers Harriman and Kuhn Loeb. But not a chance.

No sir. There's gold in them thar Nazis. But you've got to pan it the right way. When moribund intelligence outfits like the CIA and the FBI no longer have the "Evil Empire" to fight, what do they do? They discover new uses for their services. Like economic espionage, saving the rain forests, and protecting us from unknown terrorists and pornography on the Internet. Got to keep those budget dollars rolling in.

And what do Nazi-hunting organizations do when all the Nazis are dead? They go looking for Nazi gold. Got to keep those budget dollars rolling in. And once the Nazi gold is all found and accounted for, the exploratory search for a new menace will continue. There will be neo-Nazi gold, post-neo-Nazi gold, ex-post-neo-Nazi gold, and the New Gold of the Orthodox Ex Post Facto Reformed Neo Nazis. Not to mentioned updated exposes of the International Nazi Banking Conspiracy of the Illuminati, and covert circulation of purloined copies of The Protocols of the Learned Elders of Valhalla.

And then the publishing industry will mine for Hitler gold dollars with a new wave of book sales. Did Eva (Evita) Braun really micturate in Hitler's face (a golden shower), as asserted in a World War II OSS report? Was the whole Nazi era a product of the fact Hitler had only one testicle (now preserved in the form of a Faberge egg), as claimed by a professor of psychohistory? Was there any correlation between Rommel's tank manoeuvres and the contemporaneous loading of gold bullion aboard U-boats at Spanish ports? Hitler did not die. He sits at a Random House desk with a golden ball-point, condemned like Sisyphus to write his memoirs over and over again, generation after generation.

Then there will be the Sotheby art auctions, where early Hitler sketches will vie with the efforts of Picasso and van Gogh for lavish displays of conspicuous consumption. And then . . .

The moneymaking formula seems to be: Marry a despised political philosophy with a commodity. Then market heavily.

When do we hear about the Commie Gold? Isn't some gold gone from the Russian central bank? What happened to the gold Lenin kept at the Bank of England?

How about Tribal Wampum? Did a group of DNC officials shake down some Indian tribes and stash the loot in the White House basement?

What about Plutocrat Paper? Didn't Mr. Bill Clinton down in Florida announce that "the party with the most money always wins"? How's that for a political philosophy? Will some bank try to alter the water marks on the checks?

What about Monarchic Opium? You don't hear the British Foreign Office discussing that much. Just exactly would you find in the vaults of Hong Kong Shanghai? (That's pronounced "monar chic", by the way, as when royalty dictates style.)

What about Dirigiste Dinars, whereby evil governments practice an economic philosophy of confiscating the people's wealth and investing it for them?

What about IRS Ingots, whereby a modern Gestapo takes your money and issues warehouse receipts showing title to a forklift load of government accounting papers?

WHAT HAPPENED TO THE NAZI GOLD?

One Trenton Parker, an ex-Marine colonel with CIA connections and claiming to have inside knowledge as to what actually became of the Nazi gold horde following World War II, was Tom Valentine's guest on his nightly radio show, Radio Free America, on July 29, 1993. Parker is described in the Radio Free America catalog of past programs as follows:

July 29, 1993: A veteran CIA operative claiming to be with an especially secretive group known as Pegasus, was guest. Trenton Parker, a "sheep-dipped" Marine Colonel, told of his role in planning/execution of the "great energy scam" of the 70s when Big Oil drove U.S. independent oil companies out of business, closed/opened the Suez Canal, created lines at gas pumps to drive up price of oil, filched stolen gold into the market by opening the gold window to Americans for 1st time since 1933, sold weapons to Arab states getting rich from the oil scam and sealed the deal with Portland cement from Spain.

By way of background, it may be helpful to re-acquaint ourselves with a few things:

(1) Francisco Franco emerged from the Spanish Civil War (circa 1936) as the undisputed dictator of then-fascist Spain. Franco had friendly ties to Hitler's Germany.

(2) ODESSA: an abbreviation of Organisation Der Ehemaligen SS-Angehörigen (German: "Organization of Former SS Members"). The Encyclopaedia Britannica describes ODESSA, in part, as follows: "...clandestine escape organization of the SS underground... A large organizational network was set up to help former SS and Gestapo members and other high Nazi functionaries to avoid arrest... to escape from prison, or to be smuggled out of the country. The main escape routes were

(1) through Austria and Italy, then to Franco's Spain
(2) to Arab countries of the Middle East
(3) to South America.

(3) Martin Bormann: again, quoting in part from the Encyclopaedia Britannica, "[Bormann] became head of the administrative machinery of the Nazi Party, and through intrigue, party infighting, and his shrewd manipulation of Hitler's weaknesses and eccentricities, he became a shadowy but extremely powerful presence in the Third Reich... He disappeared shortly after the death of Hitler, and it was presumed that he was either dead or in hiding... Later reports, especially in the 1960s, alleged that Bormann had escaped and had been living in South America, possibly Paraguay. However, early in 1973 a Berlin forensic expert established 'with near certainty' that one of two skeletons unearthed during construction in West Berlin in December 1972 was that of Bormann, and on April 11, 1973, West German authorities officially declared him dead."

As is apparent from the Radio Free America catalog excerpt quoted above, Parker discussed many things during his July 29, 1993 appearance. What follows is the gist of his explanation of what actually happened to the "lost" Nazi gold horde.

Many of us have heard the story that the Nazi gold was thrown into a deep lake in Switzerland and sank far down, down to the bottom. Parker calls this nonsense. The gold, he says, was never thrown into any lake. The gold went into Spain, through Martin Bormann's ODESSA. There it sat, under the watchful eye of Generalisimo Franco.

A lot of people have never, ever, asked the obvious question: What deal was struck, in order for Franco to pull out of the Axis powers during the Second World War?... And the deal was: "You get to be president; we're not going to bother you... There was a deal struck... Spain became, in effect, a major access and exit point for a lot of people coming out of Germany at that time."

That is the second part of the story: what happened to the gold after it got to Spain. The gold remained in Spain, in care of Francisco Franco, until circa 1975. Then, with Franco about to expire, things began to happen. With Franco nearing his end, other factors occurred at about this same time; said factors coalescing to bring about "Phase II" of "What Happened To The Nazi Gold?" As Parker tells it, the closing of the Suez Canal and subsequent shortages of "Portland-grade cement" came together as chips to be used by international power brokers in a complicated deal.

"If you'll remember, at this particular point in time, we got rid of American's not being able to own gold. And the big push was Krugerrands. And you could buy 'em through Merrill-Lynch and Hutton and what have you. It's easy to counterfeit perfect Krugerrands if you've got gold." According to Parker, the gold was turned into counterfeit Krugerrands and sold in the biggest potential market of that time: The United States of America.

If you have doubts, then Parker asks you to consider the following: even though Americans were buying a lot of gold at that time, because of the sudden legality that now they were allowed to do so, the price of gold did not climb; it stayed flat. "The only explanation for *that* is that somebody is bringing in a new supply of gold."

Tom Valentine, host of Radio Free America, summed it up: "Tons of Krugerrands, phony Krugerrands, made from the Nazi Germany gold... This was actually turned into Krugerrands and they put it into the market."